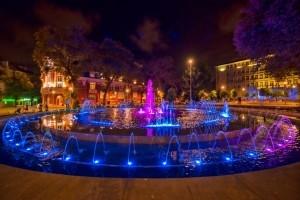 10 reasons to visit Varna in Bulgaria

Varna is the third largest city in Bulgaria and the largest on the Bulgarian Black Sea coast, occupying an area of ​​205 square kilometers. The city's location along the northern Black Sea coast, as well as its rich natural resources, make it one of the most famous resorts in Europe and the largest in the Black Sea region. At the same time, it is the intersection of the road between the Middle East and Western Europe.

If you happen to think what is so special about Varna, here are the top 10 reasons to visit our city, highlighted by visit.varna.bg:

1. Climate
Varna is located on the west coast of the Black Sea, thanks to which it enjoys a mild climate throughout the year. The coldest weather of the year is usually from December to March, when the average temperature varies between 5 and 10 degrees. Summer starts in early May and lasts until early October. Summer temperatures usually range between 25 and 35 degrees, with the most pleasant months to go to the beach and enjoy the sunshine in July and August. The temperature of seawater during the summer months is usually around 23-27 degrees.

2. Beaches and mineral waters
The region of Varna, which includes the resorts "Golden Sands" and "St. St. Constantine and Helena" are well known for their magnificent extensive beaches, warm blue sea, healing mineral springs. In "St. Konstantin and Helena ”has 7 mineral springs with a water temperature between 40 and 60 degrees, unmatched in Europe. They are calcium-magnesium and slightly mineralized, successfully treating cardiovascular diseases. Combined with the climate, its impact is even stronger. The resort "Golden Sands" is known as the "Pearl of the Bulgarian Black Sea".

3. History
It is the cradle of the oldest European civilization. In Varna you can see the original artifacts of the oldest gold treasure in the world, dating from 4400 - 4200 BC. And this is just for the beginning of your historical tour - there are many other treasures from later periods and cultures, such as Thracian, Greek, Roman, Byzantine, Bulgarian and more. Of great interest among the guests of Varna are the rich collections of museums in the city, the more so because the fourth largest Roman spas in Europe are among these museums - II - III AD, when the Roman Odessos flourished.

5. Wine and cuisine
Varna is famous for its wine grape varieties and the good quality of the wine they produce. Cellars are increasingly offering tastings of their products presented in an interesting and memorable way. Festivals are organized, which are an interesting experience and a touch of unfamiliar culinary traditions. Varna also has many traditional Bulgarian restaurants where you can enjoy the local cuisine.

6. Hospitality of the local people
Bulgarians are an extremely hospitable people. You will have the opportunity to be greeted in the traditional way with delicious local dishes and wine. Most young Bulgarians speak English as well as other foreign languages.

7. Architecture
Until the Liberation of Bulgaria from Turkish slavery in 1878, Varna was a typical Oriental city with an area of ​​about 170 hectares and a population of about 20,000 people, mainly Turks, Gagauzes, Greeks, etc., and Bulgarians were a minority. This also determines the slower penetration of European cultural influences, including in architecture. The characteristic of the ensemble construction of the modern city is the European influence, and that of the Mediterranean countries. There are Byzantine, Arabic, Moorish, Armenian and other architectural elements, enriched with bizarre Egyptian and abstract ornaments. Public and large commercial buildings are original and bear the hallmarks of a large construction.

8. Nightlife
Varna has an impressive nightlife and many say that "the city never sleeps". During the summer months it is almost impossible to find a closed bar or club at night. Many summer bars and restaurants are located directly on the beach near the Sea Garden.

9. Shopping Opportunities
In Varna you can find an abundance of modern shopping malls, traditional outdoor markets and small shops.

10. Good value for money
Last but not least, it should be noted that the prices you will pay in Varna are favorable in terms of the quality of the services offered.

These are the top 10 reasons to visit Varna, but they are certainly not the only ones. Don't hesitate and start planning your trip!
We look forward to being your hosts!